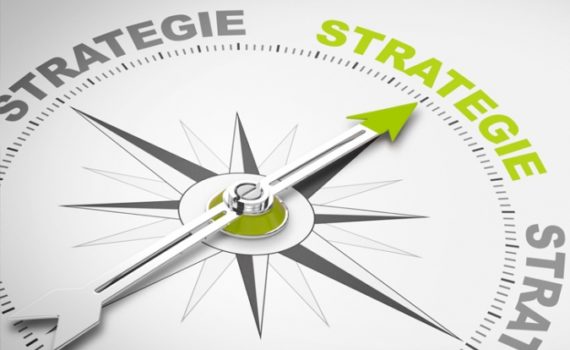 1.1 History of the NGO Major Group for Africa

Engagement of Civil Society with the United Nations system has been ongoing for several years now. However the Commission on Sustainable Development strengthened this engagement when an agreement was reached by member states to establish civil society engagement under the Major Groups Clusters. This engagement was reaffirmed and expanded in the Rio+20 Outcome Document, with the Major Groups now including other stakeholder Groups such as Persons with Disability, the aged and Volunteer Groups.

Between July 2017 and January 2018 a consultative process of nominations to the Africa NGO Major Group Representation was conducted, with both DESA and the Global NGO Major Group accepting to support the process. This done through an open call to all the over 800 accredited NGOs as well as all NGOs that had over the years expressed an interest or engaged with the Global NGO Major Groups. The call was also sent out to regional civil society networks across Africa. This led to the nomination and later an appointment of five Representatives to the Africa NGO Major Group, as well as the agreement to have the MENA Regional Representative and some NGOs with knowledge of the CSO engagement, observer status.

In March  2018, the  NGO Major Group for Africa met formally for the first time in Cairo, Egypt and agreed on a strategic framework as well as Governance and Institutional structures.

In line with the UN 2030 Agenda for Sustainable Development, Africa Union Agenda 2063 and aspirations of the citizens of Africa, the NGO Major Group for Africa seeks to see a vibrant Africa -rooted and actively engaged Civil Society, working collectively and in partnership with African Governments and other development partners for an inclusive and sustainably developed continent.

We see our role as that of catalysts, mobilizers and partners of the Africa peoples and governments. We also see ourselves as faithful representatives of the voice of citizenry, offering space and platforms for citizens’  voice to reach and influence United Nations Development Agenda at all levels. In this regard, while we acknowledge the role of the Sustainable Development Process, we see our citizens making impact across the entire United Nations systems, including, but not limited to Member States, Regional and other Intergovernmental blocs, United Nations Organs and its various General Assembly Committees, and the United Nations Agencies.

We will seek to effectively mobilize, support and engage  Africa CSOs and its stakeholders to influence the Political and Development agendas of the AU and UN.

This vision and Mission is guided by the understanding that Africa is by far the most affected by decisions and processes at the United Nations. We are also the most in need of collaboration and partnerships, considering the vast number of issues facing the continent, the multiple UN actors on the continent as well as the presence of several facets of Civil Society.

3.0 CONTEXT TO THE STRATEGIC PILLARS AND OBJECTIVES

In developing the core focus areas for the NGO Major Group for Africa, it was acknowledged that Civil Society across Africa do not have multiple representations across various UN Departments and systems. The NGO Major Group for Africa will therefore play a larger role beyond engagement with the Sustainable Development Agenda. The UN General Assembly, for instance, has established seven committees including:

Businesses  and Intergovernmental institutions  such as the World Bank also have a direct engagement space with the UN.

In order to be relevant and effectively serve Africa citizens, it is important that the NGO Major Groups engage in what is usually  considered non-NGO traditional spaces, which often has direct implications on Africa’s development agenda and governance architecture.

We also recognize the role of partnerships with other Major Groups and Stakeholders in advancing the collective agenda for Africa. We therefore seek to leverage on these partnerships to accomplish our strategic pillars.

To Contribute towards the advancement and empowerment of citizens and decision /policy makers to realize sustainable development in Africa.

To attain the overall strategic goal, this plan will aim to achieve the following strategic objectives:

The NGO Major Group- Africa will work under the following pillars: 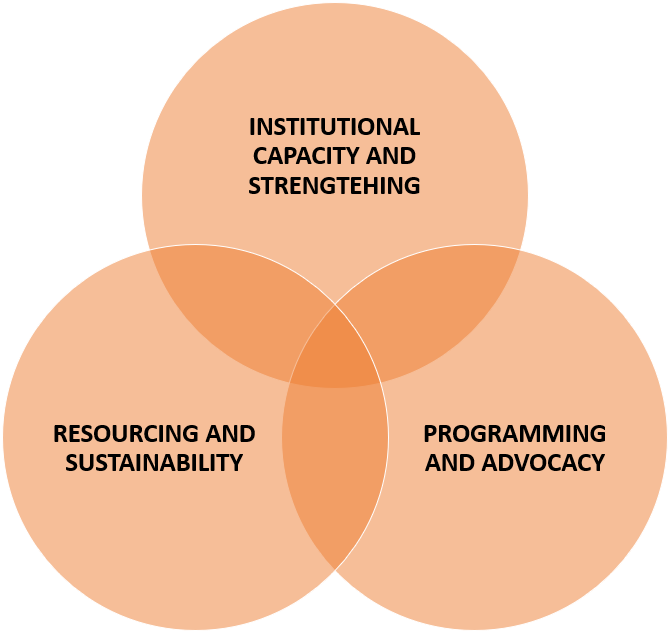 This pillar seeks to ensure that the NGO Major Group for Africa is fully functioning and widely visible. In order to realize this objective, the following activities will be undertaken.

– Help run the daily activities of the NGO Major Group for Africa;

Promote engagement and reform linkage between SCs and its institutions for sustainable development. Among the activities to be carried out under this pillar are to: 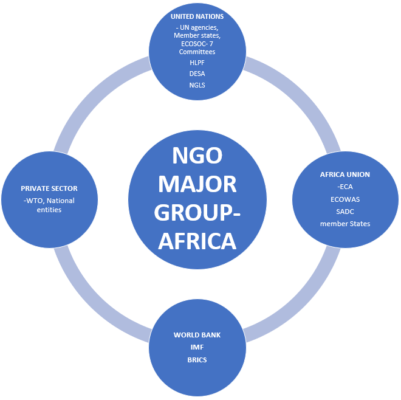 At the UN Summit Sustainable Development Summit 2015, 25­27 September, governments adopted the Declaration, “Transforming Our World: The 2030 Agenda for Sustainable Development,” on a “comprehensive, far­reaching and people­centred set of universal and transformative Goals and targets.”11 The outcome document affirms that the HLPF “will have the central role in overseeing follow­up and review at the global level.” Moreover, governments are encouraged to “conduct regular and inclusive reviews of progress at the national and sub­national levels,” to “draw on contributions from indigenous peoples, civil society, the private sector and other stakeholders, in line with national circumstances, policies and priorities.”

The role of the OPs will be facilitative and​representative. Given the number and diversity of NGOs that comprise this Major Group, OPs are expected to remain neutral, take a holistic approach by assisting and facilitating the participation of all NGOs within the NGO constituency. The role of the OPs entails assisting and facilitating participation of the NGO Major Group in the intergovernmental processes at the UN in a broad sense. Advocating for the active role of NGOs accredited to the HLPF is their overarching responsibility, as well as to protect and strengthen the space for civil society at the UN.

The NGO Major Group OP role includes a number of components, which are, inter alia, based on those outlined in the United Nations Department of Economic and Social Affairs’ “Note on Major Groups Governance” (2013):

Organizing Partners, through the Facilitation Committee, perform and have the following functions and responsibilities:

(iii)Consult with global/regional/national NGO networks to prepare written inputs to the intergovernmental process in the form of position papers and priorities for action papers addressing the themes of sustainable development under discussion, including cross­sectoral themes that reflect views on progress made, outline obstacles and constraints to implementation, and identify emerging issues and new challenges;

(xi)In partnership with DESA/DSD, and if appropriate with other major groups & stakeholders, raise funds for travel, capacity­building, communications, outreach and advocacy;

Maintain regular coordination with other OPs within Major Groups and Other Stakeholders, including through the development of joint work plans, as appropriate.