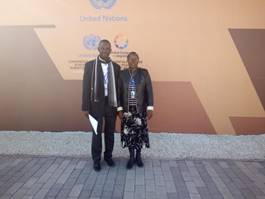 Indeed, The Adoption of this historic achievement (The Global Compact for Migration Safe, Orderly and regular on the date of 10 December 2018, at Marrakech, Morocco) represents the comprehensive framework for multilateral cooperation on International Migration Issues. It has real potential to affect positively Lives of millions Peoples Human Beings who move in to search for a dignity life and security for them and their families.

We would like to take this opportunity to commend Member States to commit to its adoption, because that should not be an occasion of division, but the Unity in order to overcome all together this challenge of International Migration, and also because unless the participation of Member States, that will not meet its potentiality.

We thank the United Nations for offering this strong and good platform, the Government of Morocco and All Member States, All Civil Societies and NGOs who actively participated to this adoption sine 2 years of negotiations and All International Organizations and Private Sectors

Then All Civil Society Organizations and NGOs working on Human Rights in General and especially on Migrant Rights and which are able to get involved and help on the implementation of this agreement are welcome and have,,, It was a long work of negotiations since two years this process has began .now baby is there and request the attention of all of us in order to help most of our Friends, Colleagues, families Migrants, taking advantage of this useful documents which is just in my point of view an additional of some of international Instrument as the Universal Declaration of Human Rights which totalized 70 Years of its adoption…In another context I think as we are all frequent travellers we sometimes used to moving from our original countries and go to work for a couple of time in others countries, we are all concerned by this document adopted. 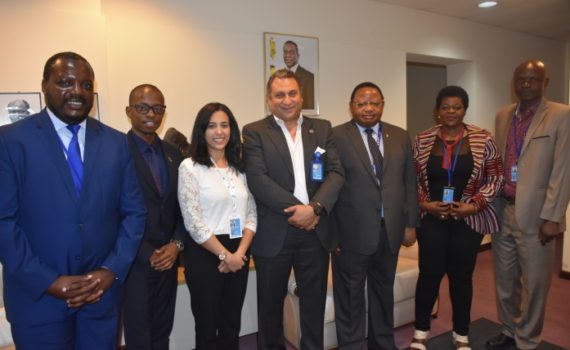 The Third High Level Political Forum ( HLPF)  on Sustainable Development was held in at the United Nations Headquarters in New York from July 9th-18th, 2018. This year’s HLPF theme was “ Transformation Towards Sustainable & Resilient Societies.”

The HLPF was  also reviewing progress towards the SDGS and focusing in particular on:

Key messages that were highlighted from the Secretary General’s Report and several other plenary sessions were that:

As part of the wider Major Groups, the HLPF afforded us an opportunity to add our voices to the dialogue under review in several ways.

This is the first time the Executive Members of the NGO Major Group-Africa attend the HLPF as a group. The HLPF was an important opportunity for learning, networking and engagement. In addition to being presented with the opportunity to learning from the experiences of 47 countries that were presenting their Voluntary National Review, the 2018 had over 260 side events covering a whole range of issues on the SDGs particularly on the six SDGs under review. We particularly benefited a great deal from attending and participating in several side events. The side events were not only informative, but they also helped showcase Africa as a continent with vast resources that if effectively managed have the potential to meaningfully contribute towards the achievement of the SDGs . Out of the 260 side events, we were able to attend and participate in several which not only empowered us with information, but also an opportunity to explore linkages with other NGOs from across the globe.

In addition we also attended several other special events for example Thailand and Egypt Voluntary National Review on the Implementation of the 2030 Agenda for Sustainable Development 2017. We particularly found these events enlightening on how member states can localize the VNR so that even when they are not presenting at the HLPF, the government is compelled to update its performance annually and be accountable to its citizens. 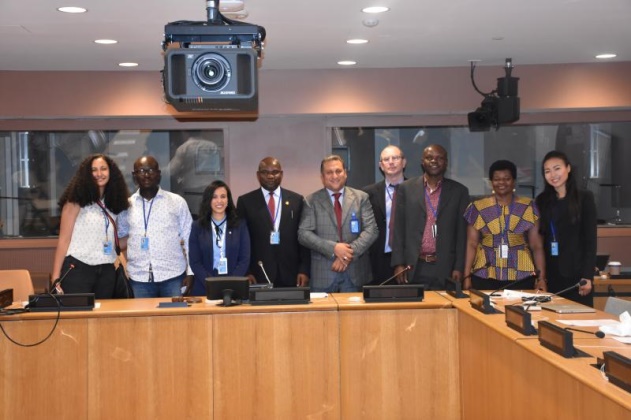 The session tackled the case of water from an international perspective in the African continent and how it effects states relations, especially states sharing Niles. The current situation shows that the world is suffering from the growing problem of lack of water as a result of climate change, environmental pollution, and increasing population in relation to the fixed water resources.The event recommended the need to find sources of funding for water and sanitation projects, develop effective local, regional and international water policies and create a successful “Mechanism of implementation”. The session also recommended civil society organizations to develop a mechanism of dialogue between the government, the private sector and stakeholders concerned with water issues, in order to develop mechanisms to reconcile various water policies such as agriculture and other industrial policies. This mechanism will allow the exchange of ideas from different points of view and ultimately lead to a significant positive development in water crisis.

This event was in relation with African Union agenda 2063 and SDGs which attracted a good number of participants and showered how important it was , the side event was organized by the Zambian government in partnership with MAAT ,AU ECOSOCC and NGO Major Group Africa. This event was every big success ,and the Event was Presided by the Zambian Deputy Ambassador & Minister Councilor to UN,Mrs Christine Kalawima ,Him.Biyika Laurence Songs ,Member of Parliament of the Republic of Uganda and Chairman Uganda Parliamentary committee on Climate Change . It was noted that green economy is the most important aspect in promoting peace in the region and if its mishandle can results in to conflicts and in order to address the issue of green economy it was also noted that all other stake holder should always be involved in order to promote peace in the region and capacity building workshop should always be organize to sensitize the communities . 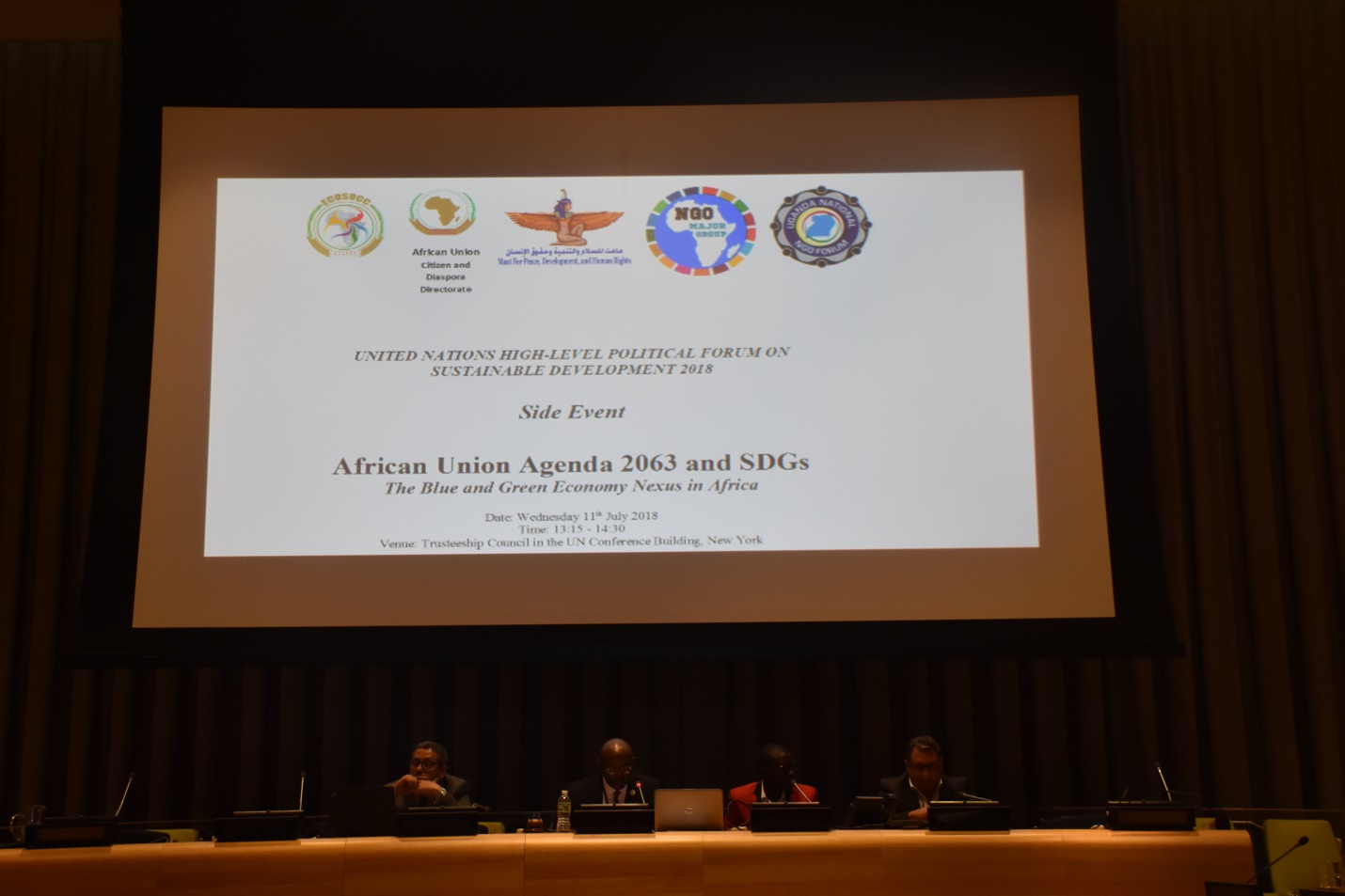 The  event highlighted that 2018 high-level policy forum focused on environmental aims. This shows that the international community has become aware of the seriousness of the environmental situation on the whole world . the event also tackled the importance of cooperation among governments, Civil society and private sector. As well; we highlighted the positive steps in the African continent towards Agenda 2030 and 2063. However, the continent still faces several challenges that it must strive to overcome. In addition, we pointed out the current environmental risks facing the whole world, and in order to overcome these risks; officials and stakeholders should promote the green economy, so that, it can achieve financial

As a fairly newly NGO Major Group to attend the HLPF, it was a very conducive en

Group functions and the roles expected of us as Regional OPs.

Each day there were debriefing meetings for all Major Groups and a particular for the NGO Major Group. All these spaces were invaluable in the information and capacity building that they provided. It was gratifying to receive commendations on our work as the NGO Major Group- Africa. Our organization through the development of the strategic plan and communiqué that we had widely shared were highly commended and recommended to other OPs to emulate. Of note was that these were initiatives we undertook without any outside funding but through individual contributions as sign of our commitment to the noble cause of development on our continent. 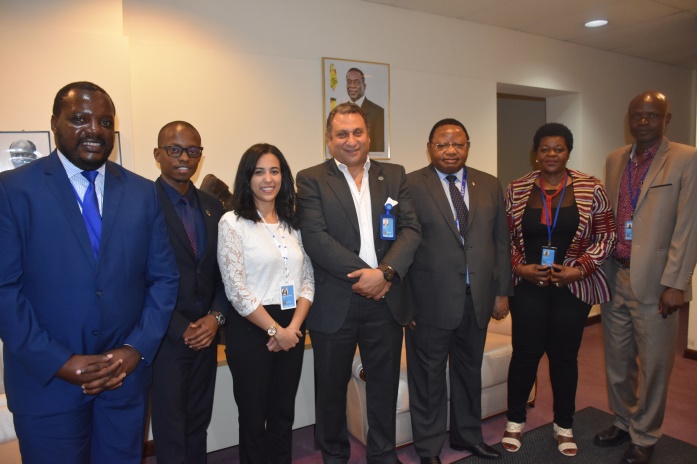 Despite our being first time attendees to the HLPF as the NGO Major Group- Africa, I think we did fairly well in our quest to link up with diplomatic missions from the Africa continent. During the course of the HLPF, as the NGO Major Group-Africa Executive, we were able to secure and held meetings with the following:

Both meetings provided us an opportunity to gain insights into how as NGOs from Africa we can effectively engage with our governments and the wider diplomatic community. Both ambassadors were very positive in our potential to meaningfully contribute to the collective development on our continent. Both ambassadors stressed the need to build strong relationships between NGOs and our governments in a manner that is both sensitive and cooperative if we are going to move Africa forward. The need for strengthening the continental Secretariat now under MAAT was highly emphasized.

The HLPF 2018 provided us with an invaluable opportunity for learning, networking and capacity building. Civil society voice, to which the NGO Major Group-Africa contributed in several ways and in different platforms, could not be ignored during the HLPF deliberations. This is an experience and opportunity that the Regional OPs and all NMGA stakeholders should take advantage of always inorder to effectively coordinate the mandates thrust upon us.

REPORT OF NGO MAJOR GROUP AFRICA’S PARTICIPATION AT THE 4TH PARTNERS FOR REVIEW MEETING IN TBILISI; GEORGIA FROM APRIL 11 – 12, 2018

2030 Agenda review, on national, regional and global levels, shall “promote accountability to our citizens, support effective international cooperation in achieving this Agenda and foster exchanges of best practices and mutual learning. It will mobilize support to overcome shared challenges and identify new and emerging issues.” (A/RES/70/1 §73)
The NGO Major Group Africa participated in the just ended 4th Partners for Review Meeting which took place in Tbilisi; Georgia from April 11 – 12, 2018.
The fourth Partners for Review network meeting, organized by GIZ on behalf of the German Federal Ministry for the Environment, Nature Conservation, Building and Nuclear Safety (BMUB) and the German Federal Ministry for Economic Cooperation and Development (BMZ), was hosted by the Administration of Government of Georgia (AOG) and carried out in joint cooperation with the United Nations Department for Economic and Social Affairs (DESA).
The Partners for Review consolidates a network of stakeholders from government, civil society, academia and the private sector involved in national review processes. By focusing on lessons learned and knowledge sharing, the network enables demand-oriented learning on new and emerging challenges of SDG review, follow-up and implementation on the road to 2030.
The meeting aimed at address cross-cutting challenges of national implementation of the 2030 Agenda and the imperative of strengthening stakeholder participation and engagement, both in national review processes and VNR preparations at country level.
The key objectives of the 4th Partners for Review meeting were as follows:
– Enable peer-to-peer dialogue on common challenges and solutions by
– Giving an introduction to prospective reporting countries about the next steps and activities for VNR preparations by presenting best practice from countries who have already reported at the HLPF
– Deepening discussion and exchange with countries who have already presented their VNR and set up national review mechanisms regarding follow-up activities after receiving recommendations at the HLPF
– Create a safe space for communicating challenges faced during VNR preparations
– Identify and communicate good practices and success factors
– Learn from a comparative analysis conducted by P4R as regards the VNRs at the HLPF 2017 to facilitate national implementation and
– Consolidate the Partners for Review as a community of practice for national implementation. Participants at the meeting benefitted from peer expertise in the issues of (i) effectively coordinating and synchronising the work of ministries, parliaments and government institutions with regard to
reviewing the implementation of the 2030 Agenda (whole-of-government approach), (ii) institutionalising the active involvement and participation of non-government stakeholders (whole-ofsociety approach), (iii) improving data collection and management and (iv) strengthening national review and monitoring mechanisms by taking into account the regional and sub-national levels.
Mr. Kofi Kankam; the NGO Major Group Organizing Partner for West Africa who represented the NGO Major Group Africa at the meeting led a working group on the topic ” Alignment of the 2030 Agenda with the 2063 African Agenda”. Attached is a copy for his full representation.
In his closing remarks, the leader of GIZ, Mr. Thomas showed his appreciation to all delegates and entreated all participants to ensure to put into use all that has been learned and shared. He further advised we all make it to the HLPF and promote the concept of the VNR to ensure governments are put on their toes in the implementation of the SDGs.
The next Partners for Review meeting was scheduled for October 2018 in Berlin; Germany and the meeting was successfully brought to a close by the leader of GIZ.