REPORT OF NGO MAJOR GROUP AFRICA’S PARTICIPATION AT THE 4TH PARTNERS FOR REVIEW MEETING IN TBILISI; GEORGIA FROM APRIL 11 – 12, 2018

2030 Agenda review, on national, regional and global levels, shall “promote accountability to our citizens, support effective international cooperation in achieving this Agenda and foster exchanges of best practices and mutual learning. It will mobilize support to overcome shared challenges and identify new and emerging issues.” (A/RES/70/1 §73)
The NGO Major Group Africa participated in the just ended 4th Partners for Review Meeting which took place in Tbilisi; Georgia from April 11 – 12, 2018.
The fourth Partners for Review network meeting, organized by GIZ on behalf of the German Federal Ministry for the Environment, Nature Conservation, Building and Nuclear Safety (BMUB) and the German Federal Ministry for Economic Cooperation and Development (BMZ), was hosted by the Administration of Government of Georgia (AOG) and carried out in joint cooperation with the United Nations Department for Economic and Social Affairs (DESA).
The Partners for Review consolidates a network of stakeholders from government, civil society, academia and the private sector involved in national review processes. By focusing on lessons learned and knowledge sharing, the network enables demand-oriented learning on new and emerging challenges of SDG review, follow-up and implementation on the road to 2030.
The meeting aimed at address cross-cutting challenges of national implementation of the 2030 Agenda and the imperative of strengthening stakeholder participation and engagement, both in national review processes and VNR preparations at country level.
The key objectives of the 4th Partners for Review meeting were as follows:
– Enable peer-to-peer dialogue on common challenges and solutions by
– Giving an introduction to prospective reporting countries about the next steps and activities for VNR preparations by presenting best practice from countries who have already reported at the HLPF
– Deepening discussion and exchange with countries who have already presented their VNR and set up national review mechanisms regarding follow-up activities after receiving recommendations at the HLPF
– Create a safe space for communicating challenges faced during VNR preparations
– Identify and communicate good practices and success factors
– Learn from a comparative analysis conducted by P4R as regards the VNRs at the HLPF 2017 to facilitate national implementation and
– Consolidate the Partners for Review as a community of practice for national implementation. Participants at the meeting benefitted from peer expertise in the issues of (i) effectively coordinating and synchronising the work of ministries, parliaments and government institutions with regard to
reviewing the implementation of the 2030 Agenda (whole-of-government approach), (ii) institutionalising the active involvement and participation of non-government stakeholders (whole-ofsociety approach), (iii) improving data collection and management and (iv) strengthening national review and monitoring mechanisms by taking into account the regional and sub-national levels.
Mr. Kofi Kankam; the NGO Major Group Organizing Partner for West Africa who represented the NGO Major Group Africa at the meeting led a working group on the topic ” Alignment of the 2030 Agenda with the 2063 African Agenda”. Attached is a copy for his full representation.
In his closing remarks, the leader of GIZ, Mr. Thomas showed his appreciation to all delegates and entreated all participants to ensure to put into use all that has been learned and shared. He further advised we all make it to the HLPF and promote the concept of the VNR to ensure governments are put on their toes in the implementation of the SDGs.
The next Partners for Review meeting was scheduled for October 2018 in Berlin; Germany and the meeting was successfully brought to a close by the leader of GIZ. 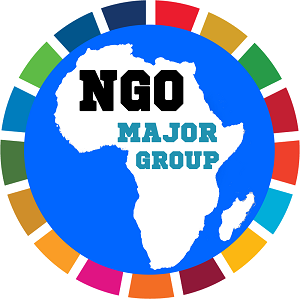 The Sub-Regional Facilitators who form the  NGO Major Group for Africa  (NMGA)held a three day Strategy Meeting in Cairo, Egypt, from 19-21 March 2018. This was the first meeting for the newly elected NGO Major Group Sub-Regional Representatives, representing all the five Blocs of Africa (Eastern, Western, Northern, Southern and Central). It was also the first time that the NGO Major Group for Africa leadership was sitting to develop a forward looking strategy that will support Africa Civil Society engagement with the United Nations, Africa Union and other Development actors in realizing both Africa’s Agenda 2063 and the Agenda for Transformation by 2030, commonly known as the Sustainable Development Goals (SDG) Agenda.

The NGO Major Group for Africa recognizes the exciting opportunity provided by the two Development Agenda i.e. AU Agenda 2063 and the UN Agenda 2030, as well as the emerging development frameworks by other stakeholders. It also comes during a period when the Africa continent is committed to a Common and collective Trade Zone, as well as specific reforms of both the Africa Union (as proposed by The Kagame Report) and the United Nations (as outlined by the Secretary General).

In this regard, engagement with the UN and Africa Union is not only a necessity for Civil Society across Africa, but requires a forward looking strategy that goes beyond existing frameworks.

We have therefore resolved as follows:

The NGO Major Group for Africa will engage on all aspects of UN agenda that affect our development. This includes, but is not limited to General Assembly second and third committees (including SDG Agenda, Climate Change and Financing for Development), UN Agencies, as well as other Member State engagements that have a direct bearing on the continent. This is no way an expansion  of the scope of the NGO Major Group beyond that outlined in Section C Paragraph 42 to 55 the Rio+ 20 outcome document  “ The Future We Want”  read together with the UN General Assembly Resolution 67/290 paragraph 8c,13,14,15,16, 22 and 24.  Instead it is a recognition of the inter-linkages of sustainable development agenda and the realization that the United Nations does not engage in silos. This is in line with Principles outlined in The Future We Want Outcome Document of the Rio +20 Summit, which is the basis for the SDG Agenda.

We will focus on the following Three Strategic Pillars:

These pillars will be realized through the following objectives:

We have resolved the following:

3.1 . The Chair of the NGO Major Group for Africa will be Ayman Okeil, Executive Director for MAAT for Peace and Development and the Sub-Regional Facilitator for Northern Africa.

MrAyman Okeil (Northern Africa Regional Organizing Partner) shall serve for a period of one year effective 21st March, 2018. Thereafter the Executive Team has the option to either renew, or rotate the Chairmanship among the five representatives.

3.2. There shall be Four Leaders of each of the  Strategic Pillars as follows:

Judith Kaulem (Southern Africa Regional Organizing Partner) shall serve as  the Head of the Institutional Capacity and Strengthening pillar.

We have agreed that:

4.1 The NGO Major Group- Africa Secretariat shall in the interim be hosted by Maat for Peace and Development, Cairo, Egypt.

4.2 Maat for Peace and Development has agreed and accepted to provide a fully functional secretariat for the UN NGO Major – Africa in the interim.

4.3 The Secretariat shall work in consultation with the functional Heads and approval from the Executive Committee on all matters of concern.

Each of the Sub-Regional Facilitators is responsible for Mobilization and ensuring engagement of  as many CSOs as possible from their Region. In this regard we will strive to have national representatives from as many countries as possible, and strive to ensure a wide engagement and collaboration with other CSO Coalitions, Networks, Organizations and all partners working on areas of interest to the NGO Major Group.

We shall also work to strengthen our collaboration and engagement with other NGO Major Groups around the world, as well as other UN Major Groups and Stakeholders in Africa.

A full  Strategy Document will be made available by  the end of April  2018.